It’s Not About You: Why Leaders Need to Look Outward

By unleashing the full potential of their teams, leaders increase safety and inclusion in the workplace. Co-author Frances Frei discusses her new book, “Unleashed.”

Trust. Love. Belonging. These are not usually topics of conversation in the office, but if it were up to authors Frances X. Frei and Anne Morriss, these concepts would underlie our understanding of effective leadership.

In their book published this week, Unleashed: The Unapologetic Leader’s Guide to Empowering Everyone Around You, Frei and Morriss argue that a true leader is focused on empowering others, not on their own power or prowess. Through helping to unleash the full potential of those they lead, a brave leader increases safety and inclusion in the workplace, creating the conditions for teams to thrive, even in the leader’s absence.

Frei, the UPS Foundation Professor of Service Management at Harvard Business School, served as senior vice president for leadership and strategy at Uber and has consulted with WeWork and other companies in Silicon Valley and beyond. Morriss is a serial entrepreneur and leadership coach. Unleashed, their second book, reflects the married couple’s passion for sharing the knowledge and experience they have gained through years as “accelerators of action.”

Kristen Senz: How did you first become interested in the study and practice of leadership?

Frances Frei: I studied math in college, engineering for my masters, and operations and information management for my PhD, which just means I got more and more applied as things went on. And then I got to Harvard and was in the Technology and Operations Management Unit, which is really looking at how to make things more efficient. What I learned along the way is that, if it weren’t for the pesky people, operations would have no problems. We could make them work beautifully, but the pesky people keep getting in the way… Then, I realized: Oh, it’s not the humans’ fault. It’s the people that are leading them. And so, if we can make better leaders, we can get to that beautiful, operational Nirvana.

Senz: What are some of the biggest and most common barriers to effective leadership?

Frei: The first one is thinking that leadership is about you, the leader. The definition that animates our work is: leadership is about making other people better, first as a result of our presence, but in a way that lasts into our absence. A lot has been written about how leaders can be more leader-ly, and a lot of it is self-absorbed. In the presence of all of that literature, we went out there and said, “This isn’t what we observe [that] is getting in the way of great leadership. We’re finding that if we can change the orientation, progress can be made.” We’ve been teaching people to look in the mirror, but I want to change the mirror to a window.

The next big thing that gets in the way is that you need a foundation of trust to lead people effectively. I’ve found that people feel like the luckiest people when they’re trusted and bummed if they’re not, but they don’t really experience trust as immediately actionable. With actions you take today, you can improve trust tomorrow, as long as you understand its component parts. [Frei outlines three components of trust—authenticity, logic, and empathy—in her TED Talk]. We can isolate whether or not you’re building trust with your peers, with your employees, with your boss, with customers. You can really get micro on it, and it’s very actionable to diagnose whether or not you’re optimizing on it. And then, more important, how you can fix it immediately. It’s not, “Oh, my gosh. We have to rebuild trust. Let’s come up with a five-year plan.” You will have wasted four years and 11 months.

Senz: What are some techniques people can use right now to empower the people they’re leading

Frei: First, you have to learn how to unleash the potential of one person. And that’s what we describe in the chapter we call “Love,” because we think it’s the utmost expression of love to help someone achieve their greatest potential. You achieve this by doing two things simultaneously, but we typically do one or the other, because we incorrectly think of it as a trade-off. People will reach their full potential if we set high standards for them, but at the same time, people also need to experience our deep devotion to their success. In practice, when we reveal our deep devotion to success, we simultaneously lower standards. And when we’re setting high standards, we simultaneously make ourselves chilly; we distance ourselves emotionally from people. A lot of people spend their lives going back and forth between those two. We call one the state of severity, the other, the state of fidelity. And what we want you to do, and what we teach you, is to get to a state of justice, which is the ultimate expression of love, which is high standards and deep devotion.

Senz: Can you give an example in which you helped unleash someone’s potential?

Frei: Let me do a parenting example. I’m deeply devoted to my children, but I have a hard time setting high standards for them. I believe it was Carol Dweck who once said, “You can either prepare the path for the boy or the boy for the path.” When I heard that, it was just like a bolt of lightning went through my body. I realized I had been preparing every real and imagined path for my boys. I was, like, weed whacking so that they would not learn or experience anything. And then I realized, I’m not supposed to weed whack the path. I’m supposed to help develop the boys so that they’re ready for any path. That’s what worked for me. I didn’t lessen my devotion, but it allowed me to layer high standards on top of it.

Senz: What is the next step in the process?

People often say, that sounds like diversity, but the key insight here is inclusion over diversity. Inclusion turns out to be the missing link.

Senz: How do these efforts intersect with corporate strategy and culture?

Frei: When companies get bigger, leaders don’t get to micromanage. Employees are making decisions that their bosses are unaware of. When that happens, there are two things guiding those decisions: The strategy—or the employees’ understanding of the strategy—and the culture. We see so many organizations work so hard on strategy and then put it on a shelf, or they keep it in the minds of 10 people. It’s a tragedy. So, we have a chapter on strategy. Why on earth would a leadership book have a chapter on strategy? Because the only two levers leaders have in their absence are the culture and how well [their employees] understand the strategy.

Senz: Has the pandemic altered your view of leadership and what it takes to succeed as a leader?

Frei: I think leaders need the “oxygen mask” more often, meaning they need to look after themselves, and they’re not leading when they do that, and they need to be way more attentive to and present for the needs of others. Great leaders are not multitasking on Zoom. They don’t have their video turned off.

Another thing—when we think about inclusion—is that there are so many more dimensions of difference now. It’s health status, it’s family status. When we talk about inclusion, it’s not OK if I make you feel more included at the expense of someone else feeling excluded. That’s a cheap way to do it, and it doesn’t last. The great leaders figure out how to make you more included while making others at least feel the same, maybe even more included. Great leaders are great at increasing inclusion for all without a fixed pie. And this pandemic has made that just go to a varsity sport level because of how many more variations there are.

Book Excerpt:   Unleashed: The Unapologetic Leader’s Guide to Empowering Everyone Around You By Frances X. Frei and Anne Morriss

The foundation of Leadership 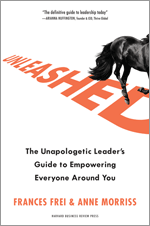 We think about trust as rare and precious, and yet it’s the basis for almost everything we do as civilized people. Trust is the reason we’re willing to exchange our hard- earned paychecks for goods and services, pledge our lives to another person in marriage, cast a ballot for someone who will represent our interests. We rely on laws and contracts as safety nets, but even those systems are ultimately built on trust in the institutions that enforce them. We don’t know that justice will be served if something goes wrong, but we have enough faith in the system to make deals with relative strangers. It’s not coincidental that trust ultimately found its way into the official US motto, “In God We Trust.” Even if trust in our earthly structures erodes, it’s so vital to the national project that we threw in a higher-order backstop.

Trust is also the input that makes the leadership equation work. If leadership is about empowering others, in your presence and your absence, then trust is the emotional framework that allows that service to be freely exchanged. I’m willing to be led by you because I trust you. I’m willing to give up some of my cherished autonomy and put my well- being in your hands because I trust you. In turn, you’re willing to rely on me because you trust me. You trust that I will make decisions that advance our shared mission, even when you’re not in the room. The more trust that accumulates between us, the better this works.

How do you build up stores of this essential leadership capital? Here’s the basic formula: people tend to trust you when they think they are interacting with the real you (authenticity), when they have faith in your judgment and competence (logic), and when they believe that you care about them (empathy). When trust is lost, it can almost always be traced back to a breakdown in one of these three drivers. You can find the roots of this framework in Aristotle’s writing on the elements of effective persuasion, where he argued that you need to ground your case in logos, pathos, and ethos. You will also find this pattern in much of modern psychology literature. (See figure 2-1 .) 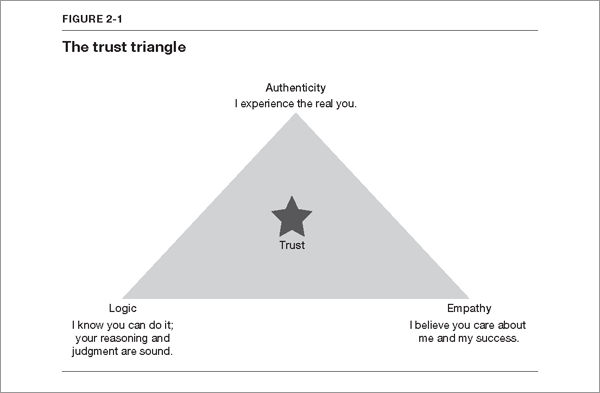 Should we trust you?

What signals are you sending about whether the world should trust you? We don’t always realize what information (or more often, misinformation) we’re putting out there about our own trustworthiness. What’s worse, stress tends to amplify the problem. Under pressure, we often double down on behaviors that undermine trust. For example, we unconsciously mask our true selves in a job interview, even though it’s precisely the type of less than fully authentic behavior that’s going to reduce our chance of being hired.

The good news is that most of us generate a stable pattern of trust signals, which means a small change in behavior can go a long way. First, we tend to get in our own way, in the same way, over and over again. In moments when trust is broken (or fails to get any real traction), it’s usually the same driver—authenticity, empathy, or logic—that gets wobbly on us. In fact, we call this pattern of setbacks your trust “wobble.” Your wobble is the driver that’s most likely to get shaky in periods of low trust. Everyone, it turns out, has a wobble.

We also all have a driver where we’re rock solid, one that stays strong and steady in our interactions with others, regardless of the circumstances. One of the three trust drivers rarely lets us down, even if we’re woken up out of a dead sleep at 3:00 a.m. and asked to perform. We call this pattern your trust “anchor.” Your anchor is the attribute that’s least likely to get wobbly on you, even when the proverbial clouds start to gather and winds start to howl.