THE SUBTLE ART OF CONNECTING WITH ANYONE  –  Zat Rana

The late George Carlin is probably one of my favorite comedians. 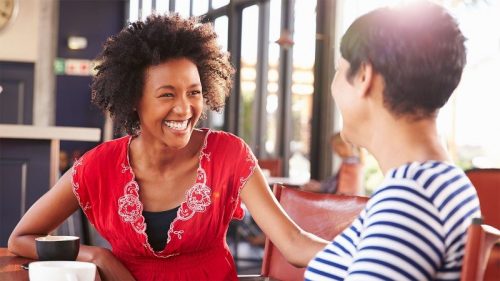 I always found him to be raw and honest, and like most great comedians, there was a sense that he wasn’t there to just laugh. He had a subtle truth to share and that was best delivered as a joke.

In this way, towards the later years of his career, he said something in an interview with Jon Stewart that resonated with me quite a bit. “I love, love individuals. I hate groups of people.”

Of course, we can all apply our own nuanced lens to that statement and pick out exceptions here and there, but to me at least, there is some sense there.  Many groups of people do great things. Many groups of people do bad things. In either case, what they have in common is that they are ideologues. And realistically speaking, if they weren’t, they likely wouldn’t accomplish much.

Still, there is something there that rubs me the wrong way. Maybe it’s their pure conviction that they’re right, or maybe it’s just their way of operating. That’s why the first part of that statement, about loving individuals, is interesting. Because I do. And I’m consistently reminded of that fact every time I get out of my regular routine and meet a swarm of new people.  In fact, the more I do that, the more convinced I get that there likely isn’t anyone out there I wouldn’t be able to see some commonality with if I sat down with them privately for, say, an hour or two. That’s fascinating to me, and it makes me wonder what it really is about individual relationships that make them successful.

How and why does a personal connection with someone work?

The Value of a Shared Culture

A while ago, someone asked me how I would describe what it’s like to bond with someone. I remember thinking about it for a moment before saying that it was something like sharing an invisible stream of consciousness with another person.  I’m not entirely sure I knew what that meant then, but I think I do now.

One of the reasons that groups of people are able to bond together is because of the shared culture that they have created. This culture is essentially an invisible presence that contains knowledge about what a particular group values, how they conduct themselves, and where they want to go.

Movements have a culture. Companies have a culture. Families have a culture.  It’s the glue that binds us together. It’s what adds context to our discussions, it’s what inspires us when no one is looking, and it’s what moves us to action.  That’s not everything, though. It’s also what divides us. In fact, most cultures are built around distinctions. They highlight what it is about them that is different, and they then use these differences to attack each other.  In large groups, with mature cultures, this is more prevalent than in small groups, with blossoming cultures, which explains my distaste for the former.  The interesting thing, however, is that individual relationships have a culture, too, and a connection is about nurturing that. And the beauty of a culture between individuals is that it doesn’t have the downside of group cultures.

That’s what I meant by my earlier statement in regards to bonding, and that’s mostly where the good stuff in a relationship comes from. The intimate secrets. The shared vulnerabilities. The inside jokes.  When I’m forming, say, a friendship with someone, outside of a group setting, we’re creating unspoken rules about our relationship in a dynamic way. One conversation at a time. One shared experience at a time.

Over time, this allows an organic connection to form — whether or not we agree on big issues or small — because every future conversation we have will be defined by the context created by past conversations.  The culture created in a two-way relationship is far more nuanced and open than a culture attached to your identity because of your affiliation to a group. It allows differences to exist without them getting in the way.

The magic of a strong relationship lies in creating the right kind of culture.

Happiness Is in the Unspoken

If you dig deep enough into questions about what it means to live a good life and how to create happiness and fulfillment, you’ll likely find yourself between a few different schools of thought, each with their own approach. That said, in pretty much all schools, the idea that a complete life tends to be one filled with a number of high-quality relationships is pretty consistent. In a way, happiness is other people. It’s the connections we build and the relationships we foster. They create us, and they continue to shape us.

Something that has recently hit home with me, personally, is how profoundly time and deliberate investment of effort changes things. On the surface, this is quite an obvious realization, but I think there is more to it, too.

As nice as it is to meet new people and to connect with them in ways that you maybe didn’t even realize you could in spite of your differences, the novelty of a new relationship still pales in comparison to something that has survived the test of time, space, and changing life circumstances. The reason, I think, is that there are different levels of shared culture.

There is, of course, the basic level at which you realize that a relationship has potential. That’s where the initial secrets, vulnerabilities, and jokes tend to come in. Even so, there is a depth that isn’t quite added to the culture until you’ve simply spent a lot of plain, ordinary time with each other.  It’s the depth you sense when you’re both sitting next to each other on a quiet dock, overlooking the water, not saying anything. Not only because you don’t need to, but also because the silence itself communicates something. There is a melody there that says more than words usually can.

This unspoken narrative takes time to cultivate in a relationship, but ultimately, that’s where the bulk of the value lies. That’s what the poets and the philosophers talk about when they talk about true companionship.

A strong relationship may be built on the foundation of a shared culture, but it isn’t truly blissful until what is not said becomes as important as what is said.

There is an old saying that has stuck with me for a few years now. I don’t remember the source, but it goes something like the following: “There is nobody you can’t learn to love once you’ve heard their story.” While my distaste for most group ideologies has persisted over time, this one idea has always stayed at the back of my mind as a reminder that there are individual people behind each and every mask worn by a collective group. This is further reinforced every time I meet and connect with someone new.

We tend to associate the word culture with the vast collective consciousness around us, but there are different levels of culture. Levels beyond the societal, the political, and the economic. Levels that show up in personal situations. Every relationship has a shared culture, and this culture is responsible for shaping each and every interaction in that relationship. It’s what allows us to connect with people who we otherwise may not understand or relate to. It’s what fosters bonds and creates new associations.  If it’s true that any sort of happiness and fulfillment relies on the quality of our relationships, then understanding and nurturing our shared cultures should be something we all need to prioritize.  The silences and the unspoken words between people who’ve put time into their relationship can either be a source of unfamiliarity or connection.

Generally, what you get depends on what you’ve invested.  – Zat Rana  /  Aug 2, 2019  This article first appeared on Design Luck.