In a letter to shareholders of Berkshire Hathaway, Buffett summarized how one arrives at leadership greatness.

Warren Buffett has always had a way with words. The greatest investor of this generation has dropped countless quotes to leave us inspired, but one has alluded me. Until now.

In Buffett’s 2015 letter to shareholders of Berkshire Hathaway, Buffett summarized how one arrives at leadership greatness in a few words: 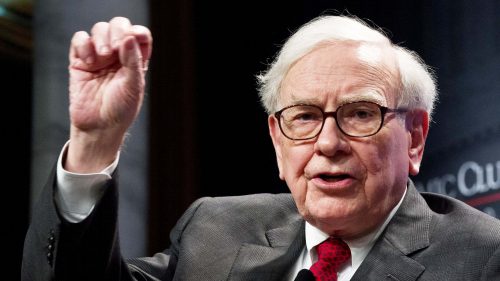 Much of what you become in life depends on whom you choose to admire and copy.

The quote was in reference to Tom Murphy — an exceptional leader who taught Buffett everything he learned about managing a company. Murphy built Capital Cities Communications into a telecommunications empire. In 1995, he sold the company (then Capital Cities/ABC) to Disney for approximately $19 billion.

3 Things to Copy from Leaders You Admire

A CEO plays many roles. The most important one is casting a vision and setting direction, and then inspiring the workforce to achieve their goals.

Murphy, who was Buffett’s biggest admirer, gave plenty of lessons on the best management practices that Buffett has adapted for his own companies.

Employees must be given autonomy to make decisions in the moment. At the most advanced organizations, employees aren’t just permitted to act on decisions, they’re actively encouraged to go beyond the traditional scope of their jobs and operate autonomously when they have enough information and the right data.

Both Buffett and Murphy subscribe to a decentralized management philosophy. The key is always to hire the right people first, train them well, push decisions down the organization, and then resist the temptation to be involved with details. Putting this trust and power in the hands of workers is critical to success.

Once you’re comfortable with increasing autonomy across the organization, the first pillar to successful management is delegation. And two-way trust must be established for a leader to feel comfortable delegating authority and sharing responsibilities.

While some level of patience is required, delegating tasks effectively leads to employees feeling useful, empowered, and integral to the functioning of the organization.

Murphy was known for the heavy delegation of authority, but he held his managers accountable for performance. Like great leaders, you must have both because delegation without accountability is an exercise in futility.

Buffett has repeatedly advised leaders over the years to weigh integrity above all traits when building a company. He once said:

We look for three things when we hire people. We look for intelligence, we look for initiative or energy, and we look for integrity. And if they don’t have the latter, the first two will kill you, because if you’re going to get someone without integrity, you want them lazy and dumb.

Murphy adds another trait to consider in leaders: common sense. In a 2000 interview with Harvard Business School, Murphy shared:

One of the interesting things I’ve learned in my life is that one of the most uncommon things in life is common sense. It’s very hard to notice whether people have great common sense.

These days, managers appear to have misplaced their logical brains as employees suffer from perpetual change fatigue, entire days are spent in one Zoom meeting after another, and bureaucracy chokes the air out of innovation and business agility.

While not every manager may show good common sense, all have the opportunity to improve their daily decision-making by admiring and copying the sensible habits of those who have it.

The first rule to apply, of course, is learning to have good judgment and consistently make the right calls. Your employees will thank you.