After prospering for more than 100 years, General Electric found itself in trouble in the early 2000s, facing the double wallop of a depressed energy sector and the financial crisis of 2008.

CEO Jeff Immelt tried to revive the company by buying Alstom, GE’s chief energy competitor, but ignored warnings from wary board directors and senior executives who claimed Alstom had made bad deals and otherwise performed poorly. Since the acquisition, Alstom has struggled—and today it’s considered one of the main reasons investors have lost faith in GE, spurring the company’s stock price to dive from a high of $55 in 2002 to a dismal $12 in early 2020.

“PEOPLE WHO ARE THIS DISCOURAGED STOP BOTHERING TO COLLABORATE WITH OTHERS TO IMPROVE THE ORGANIZATION.”

Most companies fail in their efforts to transform, and the GE example shows the main underlying reason why: Leaders often get stuck in echo chambers that merely reinforce their own ideas, says Harvard Business School Professor Michael Beer. Meanwhile, lower-level employees are often fully aware of the problems that plague a company or the reasons a particular strategy won’t work, but they tend to remain silent, fearful that speaking up could put their careers at risk.

“A CEO might be trying to execute this corporate strategy and everybody in the organization knows it’s off the rails, but no one wants to be the bearer of bad news or be seen as a complainer or a non-team player,” says Beer, the Cahners-Rabb Professor of Business Administration, Emeritus. “So there’s this organizational silence, where no one feels comfortable speaking truth to power.”

This silence is not only a morale-killer, it can also lead companies to make serious strategic mistakes, says Beer in his new book Fit to Compete: Why Honest Conversations about Your Company’s Capabilities Are the Key to a Winning Strategy. Beer, who has spent 45 years working with hundreds of companies to execute organizational change, says mental weariness among employees can cause them to lose hope in their organization and become cynical and passive.

“People who are this discouraged stop bothering to collaborate with others to improve the organization,” he says.

The antidote: Organizations need to allow critical information to be shared freely from the bottom to the top, Beer says. But he’s not talking about the typical ways companies gather input, such as through employee surveys, interviews by external consultants, or even one-on-one conversations between key managers and the CEO. These seldom move an organization forward.

Instead, Beer and his colleague Russ Eisenstat developed what they call the “strategic fitness process,” which has been used by more than 800 organizations and allows leaders to hear the raw but necessary truth from employees about “the good, the bad, and the ugly” to help shape effective business strategies.

“We created this process simply because business leaders came to us over and over to say, ‘We have a cultural problem and an inability to perform. How can we create a more effective organization?’” Beer says. “We’ve seen this process work.”

Getting the ball rolling

To start, a senior team should appoint a task force of up to eight of its best managers who send a clear message from the top that the company is serious about seeking frank feedback to make organizational changes. Then managers should interview people in all parts of the company who know what is and isn’t working, asking them to share their honest observations.

To encourage fruitful conversations, according to Beer and Eisenstat, leaders should:

Believing in the process

In the book, Beer describes how the carefully designed strategic fitness process has helped companies bring their problems into the light. It has been applied by numerous CEOs, and research has confirmed its effectiveness. But its success depends on the leader’s willingness to embrace both the practice and spirit of the process, Beer says.

Years ago, for example, Beer was approached by HR executive Jody Edwards of Hewlett-Packard, who confessed that a division of the company was suffering from low morale and was failing to meet its profit and growth goals.

In working with the company, Beer discovered that HP employees believed a lack of honest communication was a big impediment to surfacing deep underlying problems. As one employee put it, “You read about these bad marriages, where the wife and the husband both know what’s wrong. They just can’t find a way to talk to each other about it. And I think that’s what was going on. We all knew the problems were there, and I think we could not find a way to discuss it with each other in a constructive way.”

After seeking the unvarnished opinions of workers through a series of discussions, business leaders got serious about addressing the problems, and the reorganization that resulted energized the staff and led to a dramatic turnaround in performance.

“We lost a lot of employee satisfaction and commitment as a result of our problems, but regained it and more,” Edwards said in the book. “People from other divisions now want to come to work here, and they cite that interesting process—honest conversation—that we now conduct annually as one of the reasons.” 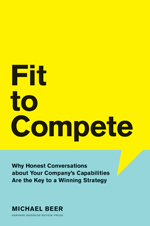 Is it inevitable that power will corrupt and that absolute power will corrupt absolutely? It’s certainly the most likely outcome if leaders cannot overcome the organizational silence created by the power differentials that go with any hierarchy. Many management failures—including the many corporate scandals of the last twenty years and the concurrent growing mistrust of leaders and institutions—are rooted in the inability of corporate leaders to learn the truth and respond effectively.

Few corporate leaders would want to lead ineffectively or ruin their organization’s reputation. But the leaders who manage to make these blunders have no way to find out that their assumptions about how to organize, manage, and lead are in fact undermining their intentions. Things will go astray in any organization, but power differentials—necessary though they may be—keep those things from being discussed and turned around.

The good news is that the honest conversations discussed throughout this book are by now a well-tested means for learning about failures well before the damage is irreversible. Just as important, the conversations encourage involvement by many stakeholders and their commitment to change. Yet such conversations are decidedly not the norm. Nor do those who follow and practice strategic management theory recognize that organizations must be disciplined enough to carry out such conversations to avoid the typical gyrations in performance and reputation.

Widespread adoption of this discipline must start with boards of directors. They must hold CEOs accountable for honest conversations and learning, not only to avoid Wells Fargo–level scandals but also, more importantly, to be long-term stewards of the organization. Good stewards value the capabilities embedded in the organization’s people, assets, knowledge, and systems. Without such stewardship, the company cannot develop sustained commitment and performance. Instead, cycles of high and low performance destroy value for all stakeholders. And just as boards need to hold CEOs accountable for honest conversation, so must those CEOs hold their business-unit, functional, and regional leaders accountable.

Of course, honest conversations can be uncomfortable for the CEO, the board, and people in lower levels. But the stakes are too high not to do it.

from: Harvard Business Review Press. Excerpted from Fit to Compete: Why Honest Conversations about Your Company’s Capabilities Are the Key to a Winning Strategy by Michael Beer. Copyright 2020 Harvard Business School Publishing Corporation. All rights reserved